Across much of the world, the American Federation of Labor and Congress of Industrial Organizations (AFL-CIO) acted as an international arm of US foreign policy, both before and during the Cold War. In doing so, the AFL-CIO sought to undermine left-leaning and communist groups, labor unions, and governments — with little concern for democracy and often with no compunction about using or supporting brutal violence — in Italy and France in the 1940s, Guatemala in the 1950s, Brazil in the 1960s, Chile in the 1970s, and many other countries. The union federation also aligned with repressive right-wing dictatorships supportive of US anticommunist foreign policy efforts by working with and funding groups aligned with such regimes. Kim Scipes and William Robinson, for example, have each offered a thorough account of how the AFL-CIO aligned with labor groups affiliated with the Marcos dictatorship in the Philippines throughout the 1970s and 1980s, a regime which regularly repressed, murdered, and disappeared trade unionists and activists. 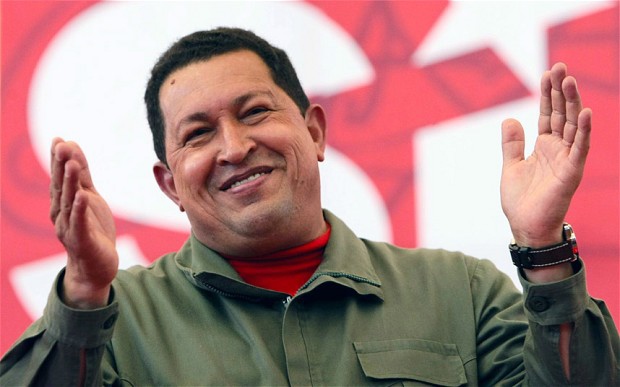 https://jacobin.com/2020/08/venezuela-hugo-chavez-afl-cio-united-states
BY TIM GILL
The AFL-CIO’s Solidarity Center has a long history of working hand in glove with the US government in undermining democracy and left labor movements throughout the world. The center emphasizes it has shifted away from these Cold War tactics in recent years. But newly obtained documents show that the Solidarity Center has worked closely with the US to undermine the Venezuelan government in the recent past.
President Hugo Chávez addresses his supporters during a massive rally called as a show of strength to counter an opposition-led strike that has battered the nation’s oil industry, on December 7, 2002 in Caracas, Venezuela. The strike follows the opposition’s failed coup attempt against President Chávez earlier that year, in which the US played many angles.
This piece has been updated with a response from the AFL-CIO’s Solidarity Center.
During the Cold War, the United States sought to defeat communism. Key to that effort was the United States’ attempt to match and defeat the Soviet Union’s influence around the world. In many locations, though, communist and socialist movements developed not as puppet movements of Moscow, but organically — particularly student, labor, and peasant organizations.
As a result, the United States worked on multiple fronts, usually clandestinely, to stop the rise of leftist movements, often with zero concern for democracy or basic human rights. A key part of that effort included confronting and marginalizing leftist labor groups.
Across much of the world, the American Federation of Labor and Congress of Industrial Organizations (AFL-CIO) acted as an international arm of US foreign policy, both before and during the Cold War. In doing so, the AFL-CIO sought to undermine left-leaning and communist groups, labor unions, and governments — with little concern for democracy and often with no compunction about using or supporting brutal violence — in Italy and France in the 1940s, Guatemala in the 1950s, Brazil in the 1960s, Chile in the 1970s, and many other countries.
The union federation also aligned with repressive right-wing dictatorships supportive of US anticommunist foreign policy efforts by working with and funding groups aligned with such regimes. Kim Scipes and William Robinson, for example, have each offered a thorough account of how the AFL-CIO aligned with labor groups affiliated with the Marcos dictatorship in the Philippines throughout the 1970s and 1980s, a regime which regularly repressed, murdered, and disappeared trade unionists and activists.
With the creation of the National Endowment for Democracy (NED) in 1983, the AFL-CIO began to work in tandem with this newfound quasi-governmental agency on advancing US foreign policy interests abroad under the auspices of “democracy promotion.” Into the present, the AFL-CIO has retained this partnership and “promoted democracy” through the Solidarity Center (SC), formerly named the American Center for International Labor Solidarity.
On its website, the SC describes itself as “[e]mpowering workers to raise their voice for dignity on the job, justice in their communities and greater equality in the global economy.” In recent years, the AFL-CIO has explicitly sought to shed its Cold Warrior image and portray itself as solely interested in the nonpartisan promotion of workers’ rights. In particular, former president John Sweeney, who was elected AFL-CIO leader in 1995 as part of a new progressive slate in the federation, “forced several of the AFL-CIO’s most notorious cold warriors into retirement,” and at the outset of his presidency, “saw unimpeded neo-liberalism a greater threat to American workers than ‘communism.’”
But despite such invocations, the AFL-CIO through the SC has continued to confront leftist governments abroad, particularly in South America, by funding and supporting groups opposed to Hugo Chávez and Nicolás Maduro in Venezuela and their United Socialist Party of Venezuela (PSUV) allies.
The AFL-CIO argues that it operates independently of the US foreign policy establishment. But documents on the federation’s recent activities in Venezuela I obtained through Freedom of Information Act (FOIA) requests indicate otherwise. These documents suggest that whatever changes have taken place in the AFL-CIO since the end of the Cold War, in recent years, the federation did not entirely give up on attempting to undermine those same governments that US state leadership has also opposed — regardless of whether or not those governments truly respect workers’ rights.

Working Alongside the Golpistas

Many scholars have detailed how the SC provided considerable support for the Confederación de Trabajadores de Venezuela (CTV), a labor confederation historically affiliated with the opposition party Acción Democrática and opposed to the Chávez government. In 2001 and 2002, the SC provided funding for CTV as it planned protests against the Chávez government, designed to induce a military coup d’état. Indeed, in April 2002, CTV leadership marched alongside the business community leadership, headed by the Venezuelan Federation of Chambers of Commerce (Fedecámaras), and opposition politicians and activists to call for the end of the Chávez government.
Although a group of military members detained Chávez for nearly two days, mass counterprotests by poor and working-class Venezuelans and internal disunity among the coup plotters overturned these efforts. For nearly the duration of the interim government, CTV leadership demanded the removal of Chávez. In the immediate years following the coup, the AFL-CIO continued to work with CTV — all with funding from the NED, the same group that largely funded the AFL-CIO’s Cold War meddling in the 1980s. Eva Golinger has detailed these relations in her work on how the coup against Chávez unfolded with plotting and assistance from CTV leader Carlos Ortega.
Following the failed coup, CTV — once again alongside Fedecámaras — engaged in a lockout in the petroleum industry. This effectively paralyzed the country, which is entirely reliant on energy to maintain its economy and garner foreign currency for imports. Workers opposed to these efforts and the broader anti-Chávez sentiment being stoked in the country formed a new confederation of unions with government support: Unión Nacional de Trabajadores de Venezuela (“National Workers’ Union of Venezuela”). To a large extent, these efforts neutralized CTV’s capacity to undermine the Chávez government, particularly within the formal labor sector.
Still, the AFL-CIO continued to support CTV efforts to confront the Venezuelan government. In recently released documents garnered from a FOIA request, it is clear that the SC continued its challenge to the Chávez government and actively sought to undermine labor efforts pursued by the socialists — as recently as 2014.
In these documents, the SC portrays the Chávez government as a brutally authoritarian regime that limited freedom of expression and cracked down on opposition activities. In many of its program descriptions, the SC asserts that the Chávez “government has increased measures to limit political opposition activities, curb freedom of expression, and increase control over popular organization and participation.” Still, the SC seemed to recognize the reality that Chávez did indeed retain much support, writing that he had “come to command such control over the institutions of the country precisely because his message keys into the deep resentment of many of the poor and marginalized working people of the country.”
Under the Chávez government, opposition members routinely decried and condemned him and his view of socialism within multiple media outlets, and they continually participated in elections and won electoral contests (that is, when they actually decided to participate in elections rather than boycott them).
For instance, though the opposition pulled out of the 2005 legislative elections in an attempt to demonstrate how authoritarian the Chávez government was — a move even discouraged by many US state functionaries — elections went forward with international monitors guaranteeing that the elections were free and fair.
Nonetheless, the SC in its reporting during this period depicts the Chávez government as rigging the vote and as systematically destroying any opposition movement, writing that “the presence of opposition parties was completely eliminated from the National Assembly,” and then claiming in a footnote that “opposition parties pulled out of the parliamentary elections . . . due to unfair elections conditions.” In later legislative elections in 2010, though, when the opposition chose to participate, they won 65 out of 165 seats. In response to questions about these documents, the Solidarity Center said the following:

We are disappointed that, to fit your predisposed assumptions, you ignored explicit program information regarding our work with a broad coalition of politically diverse unions, academics, human rights organizations and other civil society groups who convened to address egregious worker rights violations in the country. That is the fundamental work of the global labor movement and central to our work everywhere.

In the end, while the AFL-CIO has sought to reinvent itself in the post–Cold War world, it appears that much of its work remains similar to its efforts during the Cold War. Since the inception of the Chávez government and into the recent past, the group worked with actors clearly in opposition to it. For its part, CTV continually worked to democratically and undemocratically unseat Chávez — both by supporting a coup d’état and, after that failed, working with opposition politicians to defeat Chávez, such as presidential candidate Manuel Rosales in 2006.
The US state has played many angles in its two-decades-long attempt to topple the Chávez and now Maduro governments. This has included support for opposition politicians, support for opposition NGOs, support for anti-Chávez rock bands, support for pro-business groups, support for labor groups opposed to Chávez — even a zany Keystone Cops–esque caperinvolving private mercenaries.
Despite this multipronged approach, though, the United States has yet to overthrow Venezuela’s leadership. Amid economic hardship and increased US aggression under the Trump administration, the Maduro government has undoubtedly grown more authoritarian. But long before Maduro reached office and as Chávez repeatedly won elections, US state functionaries under both Republic and Democratic administrations aimed to unseat the democratically elected government of Hugo Chávez — further confirmation that US interest in democracy in Venezuela has long remained subordinate to the United States’ geopolitical interests above all else.
The SC remains the foreign policy arm of the AFL-CIO, and it has historically played a regressive role in many countries throughout the world, siding with US foreign policy against democratic politics and labor movements. The group remains conscious of its Cold War image, though, and many of its recent leaders have claimed that such nefarious meddling ended with the Cold War. Barbara Shailor, the AFL-CIO’s director of international affairs, for instance, told the Nation in 2003, “We won’t ignore questions about the past, but we’re really going to focus on what we’re doing now.”
The documents I obtained indicate this is far from the case. The SC has continued to intervene in countries in order to impede, for example, Venezuelan socialist measures, including the use of worker cooperatives and workers’ councils, within the last decade. Just as US state leaders have worked to undermine leftist leaders in Honduras and Bolivia, we can be sure that the SC has additionally worked with actors who, too, have sought to displace their governments.